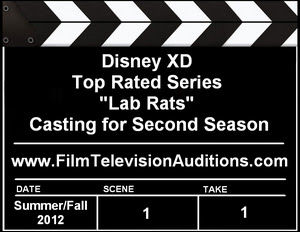 The hit Disney XD multi-camera sci-fi comedy series "Lab Rats" is now in production on it's second season, and auditions are underway with Disney casting for guest starring, recurring, and day player roles. Extras are also being cast throughout the season, which should continue shooting into February, 2013. "Lab Rats" premiered on February 27, 2012 and easily became the network's number one original series launch ever. Disney announced on May 18, 2012 that the series was renewed for a second season. One of the current roles being cast in a teen boy who is a possible boyfriend for Bree.

Chris Peterson and Bryan Moore created "Lab Rats" and are the show's executive producers and showrunners. The duo first worked together on the three-time Golden Globe Award nominated ABC series "Grace Under Fire". Peterson was a production assistant, while Bryan Moore was a writer. They then were both producers and writers on the Primetime Emmy Award winning series "That '70s Show". The last project they did before "Lab Rats" was a comedy webseries they co-wrote and directed titled "Dan's Detour of Life".

The production company for "Lab Rats" is It's a Laugh Productions, an owned subsidiary of the Disney-ABC Television Group, which was founded by Don Mink and Amy Rabins in 2004. Mink and Rabins have also been partners in a post-production accounting firm called Prep Shoot Post since 1988. It's a Laugh Productions has produced hit series for Disney Channel and Disney XD such as "The Suite Life of Zack and Cody," "Wizards of Waverly Place," "Good Luck Charlie," "A.N.T. Farm," and "Crash & Bernstein" among many others.

No phone calls or personal drop-offs.

"Lab Rats" follows Leo Dooley, who discovers three teen super-humans - Adam (Spencer Boldman) the strong one, Bree (Kelli Berglund) the fast one and Chase (Billy Unger) the smart one, living in a secret underground lab in his house. Turns out that his step-father Donald (Hal Sparks) is a wealthy inventor who created the bionic teens. The trio, eager to leave their confines, convince Leo to take them along to school, where they try to navigate the world of high school life while managing their bionic strengths. Along the way, they help Leo build self confidence while he figures out a way to keep their bionic abilities a secret from the world. Leo's mother Tasha (Angel Parker) also acts as a mother figure for Adam, Bree, and Chase, but mostly Bree, because they are the only girls in the house. Eddy (Will Forte) is the sarcastic, smart-home system who controls the Lab Rats' house and dislikes Tasha and the kids.