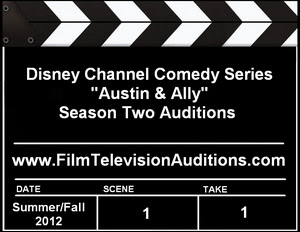 The hit multi-camera 1/2 Hour Disney Channel sitcom "Austin & Ally" is back for it's second season and the casting directors are holding auditions for co-starring, guest-starring and day player roles. In addition, general background performers are being cast throughout the season. "Austin & Ally" officially premiered on December 4, 2011. Casting for the series regulars were conducted during a national Disney Channel talent search around the United States.

Starring in "Austin & Ally" is the talented teen actress and singer Laura Marano playing the role of Ally Dawson. Marano began acting when she was five years old, and has gone on to appear on such shows as "Joan of Arcadia," "Ghost Whisperer," "Without a Trace," "The Sarah Silverman Program," and "True Jackson, VP". Ross Lynch, who was discovered during the Disney Channel talent search, plays the role of Austin Moon. Lynch is also a talented singer, musician, and dancer. He can play piano, drums, guitar, bass, and has recorded several songs for Austin & Ally. Lynch recently completed filming the Disney Channel Original Movie "Teen Beach Musical" in the lead role of Brady.

Daytime Emmy Award winner Shelley Jensen has directed the majority of "Austin & Ally" episodes. His Emmy came from directing the live-action musical Disney Channel series "Adventures in Wonderland" which was based on Disney's animated classic Alice in Wonderland. Jensen has also won three Directors Guild of America WGA Awards. Starting out as associate director on "The Mouseketeers at Walt Disney World" in 1977, Shelly Jensen has gone on to direct episodes of such Disney Channel hit shows as "Hannah Montana," "Good Luck Charlie," "The Suite Life on Deck," "Jessie," and "Shake It Up!".

Kevin Kopelow and Heath Seifert are creators, executive producers, writers, and showrunners on "Austin & Ally". The television writing and producing team also were behind the Disney Channel sitcoms "Sonny with a Chance" and "Jonas". Craig Wyrick-Solari is series producer, and has also produced for Disney Channel's "A.N.T. Farm". The production company behind "Austin & Ally" is none other than It's a Laugh Productions, an owned subsidiary of the Disney-ABC Television Group, which was founded by Don Mink and Amy Rabins in 2004. Mink and Rabins have also been partners in a post-production accounting firm called Prep Shoot Post since 1988.

Set in Miami, the story began when Austin Moon (Ross Lynch) and his best friend Dez (Calum Worthy) "borrowed" one of Ally Dawson’s songs, recorded it and put it on the internet. Austin was thrown into the spotlight and his friends jumped in to help. Ally (Laura Marano), who works in the music store, Sonic Boom, teamed up with Austin as his songwriter, Trish (Raini Rodriguez) became his manager and Dez took on the role of music video director. Now, as the gang works together to pursue their dreams in the music world, they experience many "life moments" along the way, including typical situations like Fiesta de Quince Años (celebration of a girl's fifteenth birthday) and school applications, to less than normal ones like tracking down a mall thief and getting locked in an ice cream freezer.