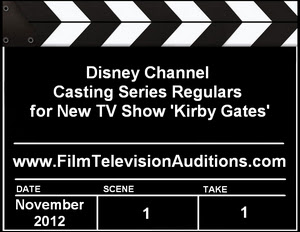 Auditions are underway for a brand new Disney Channel series pilot titled "Kirby Gates". The single camera comedy will combine live-action and animation. Kids and teens from 12 - 17 years of age are being cast as series regulars, as well as adults for possible recurring roles should the series be picked up. Many kids and teens will also be hired as extras by Disney casting to play students and other roles. People of any ethnicity can submit, or register for extra work. The show is SAG-AFTRA with AFTRA contract terms. Shooting will begin in November, 2012.

Executive Producing and directing "Kirby Gates" is BAFTA Film Award nominee David Bowers, who is an English Animator, Film director, Screenwriter, and Voice Actor from Stockport, Greater Manchester in the United Kingdom. Bowers directed "Diary of a Wimpy Kid: Rodrick Rules," his first live-action film, and also directed the third film in the series, "Diary of a Wimpy Kid: Dog Days". He also directed and served as a writer on the award winning animated film "Flushed Away" starring Hugh Jackman and Kate Winslet, and "Astro Boy" starring Charlize Theron and Freddie Highmore.

The "Kirby Gates" writers are Mike Alber and Gabe Snyder, who are also producing. The two have written for Spike TV, the MTV series "Death Valley," the short-format digital video series "Ultradome", a tongue-in-cheek, action-comedy that tapped into the comic book, video game, action-adventure, fantasy and science-fiction culture. Alber and Snyder are repped by Josh Adler of New Wave Entertainment, and Melissa Orton of Agency for the Performing Arts (APA).

Up and coming 13 year old animator, Kirby Gates, fantasizes a world of colorful cartoon characters - a vivid dream world that is at frequent odds with his real life. His older sister Dawn makes sure that his life is a nightmare as often as possible. His best buddy Wendell can't figure out what his niche is in life, which frustrates him being that he comes from a family of over-achievers. And there are the two school bully brothers that make Kirby their main recipient of their attempted torture, although Kirby manages to outwit them more often than not. His former art teacher, who now is an eccentric dumpster diver, is aware of Kirby's amazing cartoonist skills and is always there for Kirby when he needs advice. With a school principal who can't seem to relate to kids no matter how hard he tries, and clueless parents, Kirby still manages to create a vivid cast of cartoon characters that make his actual life as a "normal" kid seem boring by comparison. And then all of a sudden, a very cute and sweet girl moves in next door, and Kirby's imagination goes into super high gear - along with his raging teenage hormones as he tries to connect the dots between his fantasy life and reality.