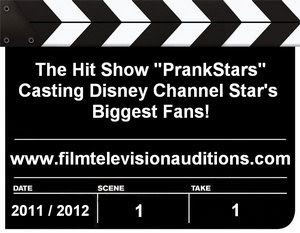 Note:  In regards to Mitchel Musso's recent legal issue that has arisen, until Disney makes an official announcement about his future with Disney Channel, this casting stands as active.

The Zoo Productions Disney Channel hit hidden camera reality series "PrankStars" is in production and the show's casting department is seeking boys and girls between the ages of 8-16, who are huge fans of a Disney Channel star. If selected to appear on the show, the unsuspecting tweens and teens come face to face with their favorite celebrities in unpredictable and humorous situations. Extras are also being cast to be a part of the pranks.

The series is hosted by Disney Channel actor Mitchel Musso who directs the pranks live from an undercover mobile command center. Musso has appeared on the Disney Channel shows and movies "Hannah Montana," "Pair of Kings," "Phineas and Ferb," "Hatching Pete, "That's So Suite Life of Hannah Montana," and "Wizards on Deck with Hannah Montana" among others. Musso co-wrote and performs the theme song for "PrankStars".

The show is Disney Channel's first reality series since "Totally in Tune", which aired in 2002 and again in 2006. Some of the Disney Channel pranksters include Selena Gomez, Debby Ryan, China Anne McClain, Adam Hicks, Zendaya, Cody Simpson, Tiffany Thornton, and Leo Howard. The show's intro always changes to reflect who's on the show.

If you have a friend or family member between 8-16 years of age that you want to prank on Disney Channel's "Prankstars", send an email to the show's casting department and let them know which celebrity should prank your friend or loved one. Tell them which celebrity they love and why they are such a big fan:

Please include a photo of the person you'd like to prank along with their name, age and hometown. Don't forget to include your contact information.

Please submit photos and resumes by email or mail only.
No phone calls or personal drop-offs.

Mitchel Musso hosts this hidden camera series where Disney Channel stars surprise their biggest fans. Unsuspecting children and teens are set up by family members and come face to face with their favorite celebrities in unpredictable and humorous situations. The reality series is hosted by Mitchel Musso who directs the pranks live from an undercover mobile command center. New episodes premiere every month featuring a roster of new stars.