Disney XD auditions and casting information for Kickin' It season 2 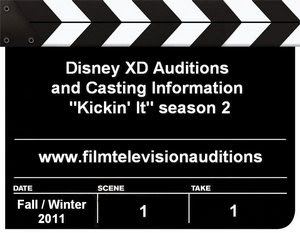 The Disney XD multi camera series "Kickin' It" is currently in production on season 2 and casting is ongoing for guest stars and extras. The show's production company is It's a Laugh Productions, the same production company behind the Disney Channel hit shows Hannah Montana, Wizards of Waverly Place, The Suite Life on Deck, Jonas, and many more.

Created by Primetime Emmy nominated sitcom veteran Jim O'Doherty, "Kickin' It" is produced by Marc Warren, who has served as executive producer, director, and writer on the Disney Channel shows Even Stevens, That's So Raven, Cory in the House, and Jonas. Warren has been Nominated for two Primetime Emmys. This production is under AFTRA contract.


Please submit photos and resumes by mail only.
No phone calls or personal drop-offs.

Do NOT send photos and resumes to the production companies (they will most likely end up being thrown away), they do not cast the films. They hire casting directors who sort through the thousands of submissions.

"Kickin' It" set at the Bobby Wasabi Martial Arts Academy, a strip mall martial arts studio and worst dojo in the underperforming nationwide Bobby Wasabi chain. There, a ragtag crew of lovable misfits welcomes a hotshot skateboarder named Jack, who will teach a group of neighborhood goofballs about life, karate and how to just plain kick it. The Bobby Wasabi Martial Arts Academy is in danger of closing until Sensei Rudy recruits Jack, the only person who can restore glory to Bobby Wasabii and vanquish their bitter rival The Golden Dragon. Jack reluctantly joins the dojo and meets his new crew - tough guy and slacker Jerry, awkward yet confident Milton and the lovable and uncoordinated Eddie. These underdogs soon realize their newfound friendship will take them places they never quite imagined.