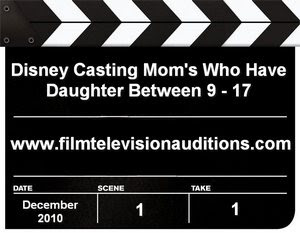 Soapbox Films is producing a new internet webisode series for Disney Online and the casting director is seeking mom's who have a daughter between the ages of 9 and 17. They are casting both english and spanish speaking mom's. It is NOT a requirement to be an actor or have any acting skills.

Mom's should be very comfortable discussing issues including menstruation and when to do the "The Talk." Moms should be quick thinkers and able to improvise in the moment. While the topic is serious, approaching it with frankness. A sense of humor is very important.

This production will air as webisodes for a celebrity endorsed website, and those that are cast will have an open dialogue, free form conversation with the celebrity these mothering topics.

Mom's who fit the above description can submit themselves by either email or postal mail.

Put "Celebrity Family Show Submissions" in the SUBJECT LINE of your email.

Or send by postal mail:

NO PHONE CALLS OR PERSONAL DROP-OFFS.

Shooting will take place in January, 2011.

In both 2009 and 2010, Soapbox Films won the Internet's highest honor, a Webby Award, for the viral YouTube sensations "Ode to Joy" starring Beaker and "Bohemian Rhapsody" starring the entire cast of the Muppets. To date, we have won 5 Webbys in all, including the title, "Viral Video of the Year" in 2010!

Among Soapbox's clients are the following Walt Disney Company assets:

Disney Online is the online and mobile web gateway to everything Disney. Designed for and enjoyed by kids and parents alike, Disney Online offer comprehensive access to Disney movies, television, games, music, travel, shopping and live events. Disney Online's Mom and Family Portfolio, a group of leading lifestyle sites, produces the #1-ranked community-family and parenting web destinations that provide inspiration and ideas for parents on a variety of topics important to today's families.

Disney Online's M.O.M. - Mom on a Mission research study, recently released data that illustrates how today's Mom is utilizing technology and the Internet to make being a Mom easier.

When asked about how they use technology, Moms said that the different devices they use make being a Mom easier. The devices help them get more done, manage their life and their family's lives more effectively, and stay better connected with family and friends. According to the study, Moms use the following technology and devices: