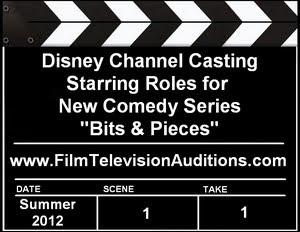 It's a Laugh Productions is in production on a brand new multicamera family comedy series pilot for Disney Channel titled "Bits & Pieces". The casting directors are auditioning actors to play the Fickman/Sullenger family, which includes two adults and four kids ages 7 - 16 years, two girls and two boys. All of the extras and stand-ins will be hired in Los Angeles throughout shooting which will take place this Summer, 2012. "Bits & Pieces" is a unique re-imagining of the traditional family comedy. The series will showcase the bits and pieces of a family's funniest moments using quick, dynamic storylines that unfold through a series of short comedic vignettes.

In the show, high school basketball coach Pete Fickman marries the school psychologist Jodie Sullenger, much to the disgruntlement of their four kids. Beautiful and popular teenager Alanna narrates all the family moments through comedic sketches, while her brainstorm brother Sticky and their new step siblings Crystal and Brody help fill in the bits and pieces as they begin their journey together as a new family.

Andy Fickman will direct the pilot from a script written by John D. Beck and Ron Hart. Fickman will also executive produce along with Betsy Sullenger. Fickman and Sullenger are the last names of the two families in "Bits & Pieces". Andy Fickman is president of Oops Doughnuts Productions, which is teaming with Walt Disney Pictures on the upcoming films "Pool Rats" and "The Most Annoying Man in the World". Fickman has directed such movies as "She's the Man" starring Amanda Bynes and Channing Tatum, "You Again" starring Kristen Bell and Sigourney Weaver, Disney's "The Game Plan" starring Dwayne Johnson, "Race to Witch Mountain" starring Dwayne Johnson, AnnaSophia Robb, and Alexander Ludwig.

It's a Laugh Productions is a an owned subsidiary of the Disney-ABC Television Group. The company has produced such Disney Channel shows as "Wizards of Waverly Place," "The Suite Life on Deck," "Hannah Montana," "Good Luck Charlie," "Shake It Up!", "Jessie," "Kickin' It", "Shmagreggie Saves the World," "Pack of Wolves" "Dog with a Blog" among many others. Don Mink and Amy Rabins founded It's a Laugh Productions in 2004. The duo have been partners in another company called Prep Shoot Post since 1988, a post-production accounting firm.

"Bits & Pieces" is set to premiere on Disney Channel sometime in 2013.

High school basketball coach Pete Fickman marries the school psychologist Jodie Sullenger, and they each have two children of their own. Teens Alanna and Sticky are Pete's kids, while teen Crystal and her 8 year old brother are Jodie's kids. "Bits & Pieces" is told through 15 year old Alanna recounting all the family moments through comedic vignettes. She is "the popular girl," beautiful and confident. Her younger teen brother Sticky - who's nickname comes from his way with drumsticks - is going through the trial and error of finding his place in the world, and is often on the receiving end of his 8 year old step brother Brody's pranks. And then there is Jodie's teenage daughter Chrystal, who is a fun tomboyish girl that does not realize that she is quite pretty. The family dog Ratchet rounds out an extremely entertaining household that must learn to get along with each other, one way or another.