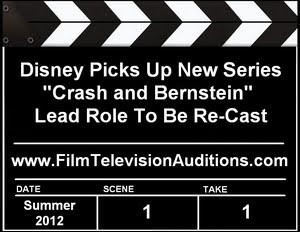 It's a Laugh Productions is currently in pre-production on a new series for Disney XD called "Crash & Bernstein". The network has picked up the series from a pilot episode, and the lead role of a 13 year old boy is being re-cast. The Disney casting director will also be casting guest stars, and day players. The extras, photo-doubles, and stand-ins will be hired throughout production this Summer, 2012. Many kids and teens will be cast. The multi-camera series will launch on Disney XD in Fall, 2012. "Crash & Bernstein" is a live-action comedy with puppetry.

"Crash & Bernstein" was created by "Austin & Ally" writer Eric Friedman, who will executive produce alongside Mike Larsen. Friedman's other credits include working as a staff writer on Nickelodeon's "Drake & Josh," Disney's "Zoey 101" and "I'm In The Band". Mike Larsen has worked as a writer and/or producer on such shows as "Grace Under Fire," "The Drew Carey Show," "Reba," and "Sabrina, the Teenage Witch".

In the pilot episode of "Crash & Bernstein," the show revolves around 13 year old Wyatt Bernstein, who lives with his mother and four sisters. Wyatt's one wish is to have a brother. On his birthday, Wyatt's sisters bring him to one of those places where you can build your own doll, similar to the Build-A-Bear Workshops. He ends up building a rugged looking doll with messy hair, a gap in his teeth, and a scar. He names his doll Crash. One day, his new brother magically comes to life in the form of his puppet Crash. Emmy-nominated puppet master and filmmaker Tim Lagasse ("Sesame Street," "Between the Lions") will star as Crash.

It's a Laugh Productions is a an owned subsidiary of the Disney-ABC Television Group. The company has produced such Disney Channel shows as "Wizards of Waverly Place," "The Suite Life on Deck," "Hannah Montana," "Good Luck Charlie," "Shake It Up!", "Jessie," and the upcoming "Shmagreggie Saves the World," "Pack of Wolves" among many others. Don Mink and Amy Rabins founded It's a Laugh Productions in 2004. The duo have been partners in another company called Prep Shoot Post since 1988, a post-production accounting firm.

The comedy series will revolve around Wyatt Bernstein, who lives with his mother and four sisters whose one wish is to have a brother. One day, his new brother magically comes to life – in the form of an energized, attention-span-challenged, wildly competitive puppet named Crash.