Disney Channel casting actors and extras for 'Shake It Up!' season 3 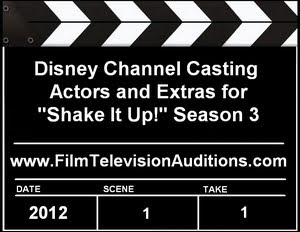 It's a Laugh Productions and Disney Channel are in production on the third season of "Shake It Up!". The first two seasons consisted of 47 episodes. The show's casting director is auditioning actors for guest starring and recurring roles. Extras are being hired throughout the season. "Shake It Up!" is ranked as the number one series among Tweens 9-14 and Kids 2-11. The multi-camera sitcom follows the adventures of Cece Jones (Bella Thorne) and Rocky Blue (Zendaya) as they star as background dancers on a local show, Shake It Up Chicago. Cece and Rocky deal with their circumstances, by adapting and maintaining their social status at school.

Joel Zwick is director for the majority of "Shake It Up!" episodes. He has directed over 22 television pilots, all of which have gone on to successful weekly series runs. He has directed episodes of the Disney Channel shows "The Suite Life on Deck," "I'm in the Band," "Good Luck Charlie," and "Pair of Kings". Primetime Emmy Award winner Shelley Jensen has also directed many episodes of "Shake It Up!". Jenson is a Disney Channel regular director who has directed episodes of "Hannah Montana," "Sonny with a Chance," "Austin & Ally," "Jessie," and "Kickin' It" among others.

Rob Lotterstein and Eileen Conn serve as executive producers of "Shake It Up!". Lotterstein is a winner of the prestigious Humanitas Prize, an award for film and television writing intended to promote human dignity, meaning, and freedom. He won for his work as creator, writer, and executive producer of the Warner Bros. Television show "The War At Home". Eileen Conn has been nominated for two Primetime Emmy Awards, both for executive producing the hit NBC series "Mad About You". Cohn has enjoyed an illustrious career as producer and writer that has spanned over two decades. Primetime Emmy Award nominee Frank Pace is producer of "Shake It Up!". Pace has produced over 500 episodes of network television in his career.

It's a Laugh Productions is a an owned subsidiary of the Disney-ABC Television Group. The company has produced such Disney Channel shows as "Wizards of Waverly Place," "The Suite Life on Deck," "Hannah Montana," "Good Luck Charlie," "Jessie," "Kickin' It", "Shmagreggie Saves the World," "Pack of Wolves," "Dog with a Blog," and "A.N.T. Farm" among many others. Don Mink and Amy Rabins founded It's a Laugh Productions in 2004. The duo have been partners in another company called Prep Shoot Post since 1988, a post-production accounting firm.

Shake It Up revolves around the adventures of best friends Rocky Blue (Zendaya) and CeCe Jones (Bella Thorne) who, with the help of their longtime friend Deuce Martinez (Adam Irigoyen), fulfill their favorite dreams of becoming professional dancers when they land roles as dancers on a local show, "Shake It Up, Chicago!". Cece and Rocky deal with their circumstances, by adapting and maintaining their social status at school while watching CeCe's little brother, Flynn (Davis Cleveland). The show also has storylines which include Rocky's brother Ty (Roshon Fegan), who also has dance skills. Selena Gomez performs the theme song, "Shake It Up".