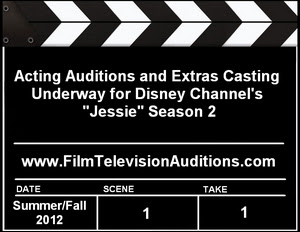 A Disney Channel Original Movie based on "Jessie" is in development.
AB Media Publishing, LLC

It’s a Laugh Productions is in production on the second season of the hit Disney Channel family teen sitcom series "Jessie", and the Disney casting team is auditioning talent for recurring, guest starring, and day player roles. Extras are cast throughout the season in Los Angeles. "Jessie" was renewed for a second season of 24 episodes on March 11, 2012. There is also a Disney Channel Original Movie in development based on the series. Shooting will run through the end of Fall, 2012.

"Jessie" follows 18 year old Jessie Prescott (Debby Ryan) who moves from the Marine base in a small Texas town where her strict Sergeant father in stationed, to New York City. Jessie is determined to be a brilliant success, as soon as she can decide what exactly what she wants to do. She goes to work as a nanny for a high-powered couple who have a broad of multicultural children, all adopted except Emma (Peyton List). The kids have driven a steady stream of nannies running for their lives, but Jessie surprises herself with how much she comes to rely on the support and advice of the kids in her care. Also helping to guide her moral compass are Bertram (Kevin Chamberlin), the family’s butler, and Tony (Chris Galya), the building's 20-year-old doorman.

Two-time Primetime Emmy Award nominee Pamela Eells O'Connell is executive producer with her company Bon Mot Productions. She is also the head writer and showrunner. On a television show, the writer is the executive producer, or the boss. In movies it is different. There the director is the boss. Everybody reports to the executive producer in TV - costumes, props, art direction on the set, what an individual set looks like, the music, everything, comes to the writer for final approval. O'Connell revels in this position. Don Mink and Amy Rabins produce for It's a Laugh Productions.

In 2012 to date, "Jessie" is TV’s #1 series in Kids 2-11 (3.014 million/7.3 rating), Kids 6-11 (2.536 million/10.3 rating) and Tweens 9-14 (2.122 million/8.8 rating). Disney Consumer Products has launched the D-Signed Jessie Prescott Collection, a line of tween apparel inspired by the Jessie character. Exclusively available at Target, the collection includes spring dresses, layered skirts and embellished tees that embody the character's style with a mix of sophistication and youthful design for a fun, polished look.

The series follows Jessie Prescott (Debby Ryan), an 18-year-old small town girl with big dreams who, rebelling against her strict Marine Sergeant father, decides to leave the military base in Texas where she grew up and moves to New York City. She accepts a job as a nanny and moves into a multi-million dollar penthouse on the Upper West Side with the wealthy Ross family which includes: jet-setting parents, Morgan (Charles Esten) and Christina (Christina Moore); and their four rambunctious children: Emma (Peyton List), Luke (Cameron Boyce), Ravi (Karan Brar) and Zuri (Skai Jackson); along with the family pet (and Ravi's companion) Mr. Kipling, a seven-foot monitor lizard. With a whole new world of experiences open to her, Jessie embarks on new adventures in the big city as she grows to rely on the love and support of the children in her care. Assisting her are Bertram, the family’s sarcastic butler (Kevin Chamberlin), and Tony (Chris Galya), the building's 20-year-old doorman.