Disney Channel's dance competition Make Your Mark: Shake It Up Dance Off underway 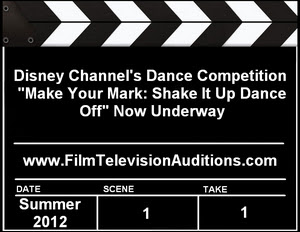 Kids and tweens now have the opportunity to shake it up and break it down with the return of Disney Channel's popular dance competition "Make Your Mark: Shake It Up Dance Off." Last year, more than 12 million viewers watched the two-night finale event, skyrocketing it to #1 among Kids 6-11 and Tweens 9-14 for both nights. This year, kids once again have the opportunity to compete for the Grand Prize - a performance in an episode of Disney Channel's top-rated series "Shake It Up."

Beginning June 15, 2012 viewers can visit DisneyChannel.com/Danceoff where "Shake It Up" choreographer Rosero McCoy hosts instructional dance videos that teach kids steps seen in the hit Disney Channel series. New dance tutorials will be uploaded throughout the summer and beginning June 29, with the consent of a parent, kids ages 8-16 are invited to visit DisneyChannel.com/Danceoff to create and submit their own short dance videos to be considered for a chance to compete in the on-air dance competition. Dance videos can be choreographed or freestyle and up to 45-seconds long, with a maximum of five dancers.

Also this summer, Club Penguin players will have the chance to make their mark and shake it up when Club Penguin's annual Music Jam is transformed into the "Make Your Mark: Ultimate Jam." Beginning July 19, 2012 through August 1, players in the Internet's #1 virtual world will be invited to chat and dance with customized Rocky and CeCe penguins, and even unlock exclusive dance moves, just like the characters from "Shake It Up."

In September, finalists will be announced and they'll square off in front of celebrity judges during the "Make Your Mark: Shake It Up Dance Off" which will air on Disney Channel in October. "Shake It Up" stars Bella Thorne and Zendaya will return to the popular dance competition.