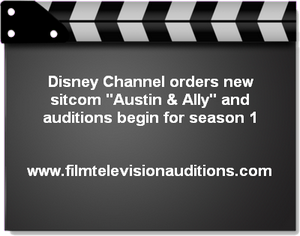 It's a Laugh Productions, which is a subsidiary of The Walt Disney Company, has been given a season pickup for the multi-camera live-action comedy series "Austin & Ally" by Disney Channel. The announcement was made on May 25, 2011. Auditions and casting calls are taking place for the series regulars. Casting for guest stars, day players and extras is continuing throughout taping season one in Fall/Winter, 2011.

During casting on the pilot episode, there was a national talent search for the starring roles of Austin and Ally. Newcomer Ross Lynch was discovered through the talent search and was cast as Austin, Laura Marano ("Without a Trace," "Back to You") was cast as Ally, Raini Rodriguez (Disney's "Prom," "I'm in the Band") as Trish and Calum Worthy ("Psych," "Good Luck Charlie") as Dez.

Kevin Kopelow and Heath Seifert are producing "Austin & Ally" and also will serve as head writers. They both have collaborated as writers/producers of the Disney Channel sitcoms "Sonny with a Chance," and "Jonas". Kopelow and Seifert have also signed a deal with Disney for their screenplay "The Most Annoying Man in the World", which will be produced by Andy Fickman's Oops Doughnuts Productions.

The series chronicles the friendship of an unlikely duo whose lives unexpectedly enliven when one becomes an overnight Internet musical sensation. The first season will be premiering in late 2011 on Disney Channel. "Austin & Ally" is under AFTRA contract.

Austin is an extroverted musician and singer, and Ally is a brilliant yet shy songwriter. They have two best friends, Trish and Dez. Unbeknownst to Ally, Austin and Dez "borrow" one of her songs, record it, create a video and post it on the Internet, after which the song and Austin become a local sensation. When Trish convinces Ally to tell the world she wrote the song, Austin pleads with her to write another hit for him. Instead, the two combine their talents to create a true musical tour-de-force.