Casting has been completed. 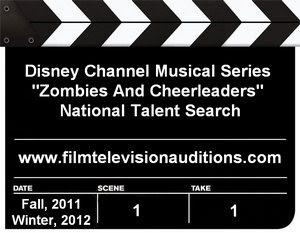 A brand new music-driven pilot titled "Zombies & Cheerleaders" has been ordered by Disney Channel, and the Disney casting directors are looking at talent nationwide for the starring roles in the show. Non Los Angeles actors are submitting video auditions, and many roles are high school student age, however some roles are as young as 7 and as old as 40's. Numerous actors and extras to portray students, parents, and faculty will also be hired.

The show revolves around Zed Necrodopolis, a high school student who happens to be a zombiewith several zombie friends. Although the zombies in the series are able to overcome their hunger for brains thanks to an invention called the “z-pack,” which looks like a wristwatch, Zed and his zombie friends remain unpopular with the school’s cheerleaders.

Todd Strauss-Schulson will direct from a script written by Joseph Raso and David Light. Schulson was hired by American Idol Season 3 contestant Taryn Southern in 2008 to direct her in her first comedic musical web series that she also wrote and produced. It was titled "Private High Musical" and was released across various media platforms. Schulson has recently finished his first feature film, "A Very Harold & Kumar Christmas" for New Line Cinema and Mandate Pictures.

Please submit photos and resumes by mail only. Do not send video demo discs, rather include a link to your demo on YouTube or Vimeo.

No phone calls or personal drop-offs.

The story follows Zed Necrodopolis, a typical high school student with one small caveat... he happens to be a zombie. Despite a high-tech wristwatch designed to curb any appetite he may have for his classmates, he and his zombie friends remain unpopular with the school’s most influential group, the pom-pom wielding cheerleaders. Never one to back down from a challenge, Zed sets out to improve zombie student body relations and win the attention of Addison, the cheerleading squad’s newest member who is without zombie prejudice.