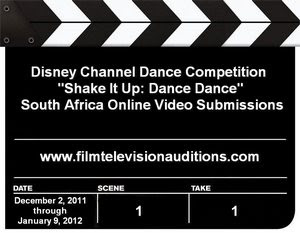 The "Shake It Up: Dance Dance" winner will be announced on February 25, 2012.
AB Media Publishing, LLC

"Shake It Up: Dance Dance" is inspired by Disney Channel's smash hit buddy comedy series "Shake It Up!" starring the multi-talented award winning actress Bella Thorne, Zendaya Coleman, Davis Cleveland, Roshon Fegan, Adam Irigoyen, Kenton Duty, and Caroline Sunshine. The show follows the adventures of Cece Jones (Thorne) and Rocky Blue (Zendaya) as they star as background dancers on a local show, Shake It Up Chicago. It also chronicles their misadventures on- and off-set, and their troubles and rising social status at school. Disney has announced that a Shake It Up movie is in the works.

Disney Channel's South Africa version of "Shake It Up: Dance Dance" launched on December 2, 2011 and will give kids between the ages of 8 - 14 a fantastic opportunity to learn some of the dance moves from the "Shake It Up" series. Anyone who is a resident of Africa and in that age range can make a homemade video of themself performing a 30-second dance routine to any one of four songs from the Official Disney Channel South Africa contest website. There is a video on the site that teaches dance routines from the series "Shake It Up!".

After the contest submission deadline passes, Disney Channel's panel of judges (consisting of at least one independent judge) will select the best 10 submissions and viewers can then go online and vote for their favorite contestant. The criteria that the judges will base their selections on are creativity, originality, style, effort and enthusiasm.

"Shake It Up: Dance Dance" will climax on February 25, 2012 when the winner is announced on the Disney Channel premier of "Shake It Up!" season 2.

Here are the prizes that the winner will receive:

The nine runner ups will receive the following:

The Official "Shake It Up: Dance Dance" South Africa Website

"Shake It Up: Dance Dance" Promoter

About the series "Shake It Up!"

"Shake It Up!" is a Disney Channel teen sitcom produced by It's a Laugh Productions, which is a subsidiary of The Walt Disney Company. The series had the highest-rated Sunday series premiere in Disney Channel’s 27-year history. On March 16, 2011, it was announced that the series had been renewed for a second season, and on September 29, 2011, Disney Channel announced it had increased Shake It Up's second season order to 26 episodes. An album with songs from the series, Shake It Up: Break It Down, was released on July 12, 2011.

One of Hollywood's top executive producers and writers, Chris Thompson, is the creator of "Shake It Up". He executive produces the show along with Rob Lotterstein and Jeff Strauss. The show is being produced by It's a Laugh Productions, the same production company behind the Disney Channel hit shows Hannah Montana, Wizards of Waverly Place, The Suite Life on Deck, Jonas L.A., and many many more.

Rosero McCoy is the choreographer for "Shake It Up" with Chlōd as assistant choreographer. McCoy has worked as choreographer on such shows as "Camp Rock 2: The Final Jam ," "The Sing-Off," "America's Best Dance Crew," along with the feature films "Step Up," "Alvin and the Chipmunks: The Squeakquel," and "Rio ".

"Shake It Up!" is currently casting actors and extras for season 2. For more information visit the following post:

Disney Channel "Shake It Up!" Auditions