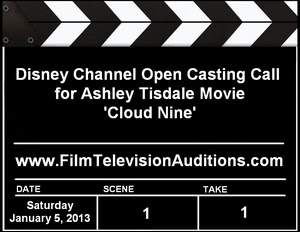 "Cloud Nine" is filming in Utah through the end of February, 2013.
AB Media Publishing, LLC

Blondie Girl Productions in association with Salty Pictures and Hollywood Farms will begin shooting in January, 2013 on a new Disney Channel Original Movie titled "Cloud Nine". The project is a snowboarding themed telefilm. The local Utah Disney casting directors have scheduled an open casting call for featured and general background performers in Salt Lake City. Snowboarding experience is helpful but not required. All types are needed, and there is no previous experience required to be cast. Filming will continue throughout February, 2013.

"Cloud Nine" tells the tale of teen snowboarders competing in the Summit Valley Fire & Ice Games. Will Cloud is a former snowboarding ace who gave it up after injuring himself, and due to his mother who lost her husband to cancer and is afraid of losing Will. Kayla Morgan is the daughter of the wealthy Summit Valley Ski Resort owner and principal investor in Swift Snowboard. The two develop feelings for each other, all the while overcoming all the odds to become the best snowboarders in Summit Valley.

Directors Guild of America DGA Award winner Paul Hoen will direct "Cloud Nine" from a teleplay written by Justin Ware of Hollywood Farms. Rewrites on the script have been done by by Don D. Scott, who previously collaborated with Hoen on the Disney Channel Original Movie "Let It Shine". Paul Hoen has directed the Disney Channel movies "You Wish!", "The Luck of the Irish," "Tru Confessions," "Eddie's Million Dollar Cook-Off," "Read It and Weep," Jump In!", "The Cheetah Girls: One World," "Dadnapped," and "Camp Rock 2: The Final Jam". He has also directed episodes of the Disney series "Even Stevens," "Jump In!", "Jonas," and "Zeke and Luther".

The Disney casting directors in Utah are looking for local people to work as general background actors:

• If you fit the bill, submit your full name, phone number, age, and a current color snapshot to the following:

The casting team will contact you with further instruction IF you are selected.

NO phone calls or personal drop-offs.

"Cloud Nine" centers on a group of teens who attend Summit Valley High and compete in Snowboarding. Will Cloud is a former teen snowboarding ace who gave up competing after fracturing his leg in an event, and now helps his mother run her pet spa for dogs at the upscale Summit Valley Resort. After the resort owner's daughter Kayla moves to town, Will ends up coaching her to compete in the Summit Valley Fire & Ice Games Half Pipe Snowboard event. As the two become close, romance is inevitable. Action, deception, humor, and a group of jammin' dogs makes for an amazing story of human spirit!