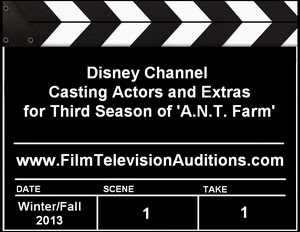 On October 2, 2012 "A.N.T. Farm" was officially renewed for a third season by Disney Channel. Walt Disney Television in association with It’s A Laugh Productions are in production and shooting is underway at Hollywood Center Studios in Los Angeles, CA. The show's award winning Disney casting directors are auditioning actors for strong recurring and guest starring roles, as well as smaller speaking roles known as day-players. The extras casting company is hiring background talent throughout the season, which is scheduled to premiere in June, 2013 on Disney Channel.

The show is a live-action comedy series that takes place in San Francisco and centers on 12-year-old musical prodigy Chyna Parks and her friends Olive Doyle and Fletcer Quimby, who attempt to live a typical teenage lives. But that can be challenging, since they are members of the prestigious A.N.T. (Advanced Natural Talents) program. In season three Chyna, Olive, and Fletcher are accepted to the prestigious A.N.T. (Advanced Natural Talents) Zoltan Boarding School. Joining them is popular cheerleader Lexi Reed, who reveals her own prodigious talent. With an unconventional curriculum and the opportunity to learn from other students in the boarding school program, the A.N.T.s strive to take their abilities to the next level.

Canadian television producer and writer Dan Signer is creator and executive producer of "A.N.T. Farm," and also serves as the series showrunner. Signer's credits include "The Suite Life of Zack & Cody" and its spin-off, "The Suite Life on Deck," as well as "Stacked," "Quintuplets," "Baby Bob," "True Jackson, VP" and "Mr. Young," which he created and executive-produces for Canadian channel YTV. Also executive producing is Stephen Engel, who created and executive-produced "The Big House," "Inside Schwartz," and "Work With Me." His writing/producing credits include three Emmy Award-winning television series, "Dream On," "Mad About You" and "The Big Bang Theory". Vic Kaplan has taken over as producer of the show.

The 2013 Los Angeles Actors Resource Guide eBook comes with free quarterly updates and includes the following information and documents for adults, minors, and foreign talent who would like to work as an actor or extra on film and television productions in Los Angeles and the United States:

In this live-action comedy series, 12-year-old musical prodigy Chyna Parks navigates high school as a member of the prestigious A.N.T. (Advanced Natural Talents) program. Alongside her fellow A.N.T.s, Olive, who possesses a photographic memory, and Fletcher, an artistic genius, Chyna attempts to live a typical teenage life. Rounding out the group is popular cheerleader Lexi and Chyna's mischievous older brother, Cameron. "A.N.T. Farm" takes an exciting turn in the third season when musical prodigy Chyna Parks and her friends, Olive Doyle and Fletcher Quimby plus Lexi Reed, who reveals her own prodigious talent, are accepted to a prestigious A.N.T. (Advanced Natural Talents) boarding school. With an unconventional curriculum and the opportunity to learn from other students in the program, the A.N.T.s strive to take their abilities to the next level.